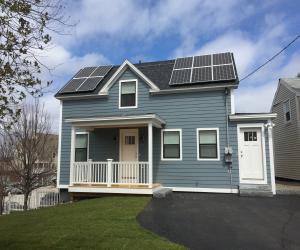 We now have over a year's worth of utility data for our rental at 37 Fox Street, Portland. As you may recall, we performed a deep energy retrofit in early 2016 and prepared a case study outlining the home energy improvements undertaken.

As part of the retrofit process, we removed the oil burner and installed two mini-split heat pumps for heating and cooling. In addition to airsealing and insulating the building envelope, we installed a 2.85 kW photovoltaic solar array on the roof. This combination of improvements allowed us to have an entirely electric home. As such, we were able to utilize Maine's net energy metering law. This program, implemented by Central Maine Power (CMP), credits your utility account for excess electricity generated by your panels and exported to the grid.

The following sections of this post explain how much energy was used for heating/cooling, water heating, lighting, and plug-load uses; how much electricity was produced by the solar panels; and an accounting of the monthly electric bills.

As you can see from the chart below, consumption spiked over the winter, primarily due to heating. Heat pumps are less efficient when the temperature dips below 15 degrees Fahrenheit, so they need to work extra hard to provide a comfortable indoor temperature. On the flip side, electric consumption was minimal during the summer months, as it is comparatively easier for the heat pumps to cool the house when it is hot outside than it is to warm the house when it is cold outside. 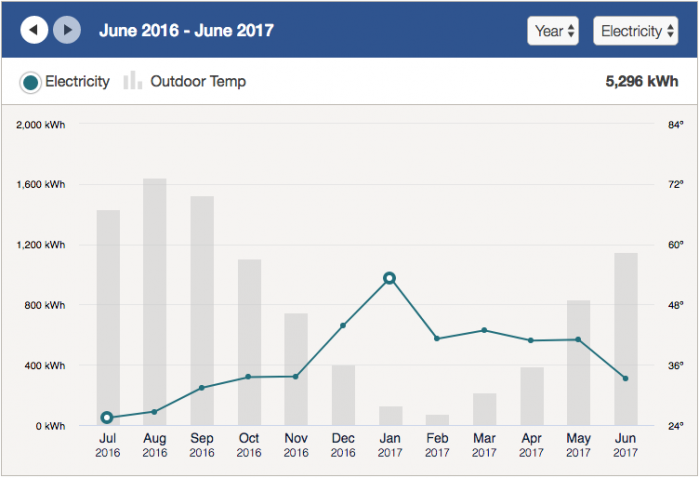 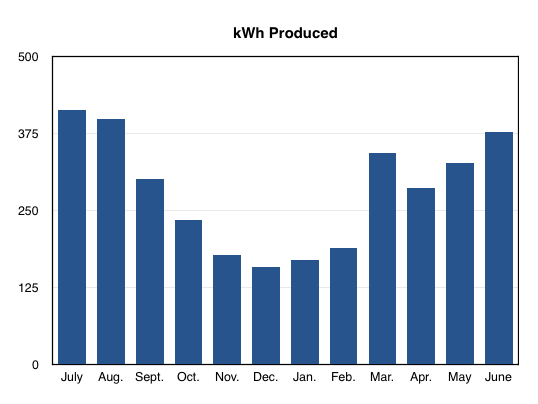 The solar system generated a total of 3,378 kWh during this one year period. As expected in Maine, production plummeted over the winter and peaked during the summer. Maine's net energy metering program, though, allowed us to apply credits earned in the summer to bills incurred during the winter.

The net amount of energy consumed during this year-long period was 3,041 kWh. The table below shows the value of the kWh consumed, the value of the electricity exported to the grid by the solar panels, and the net monthly utility bill paid to CMP. 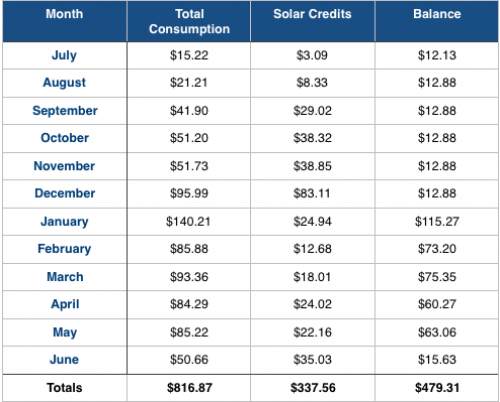 Note, however, that the production credit was quite small during the summer, considering the amount of energy produced by the panels. One would think that the credit would be highest in the summer when the panels generate the most electricity. CMP, though, won't pay cash for energy produced -- they will only credit the solar customer's bill. If there isn't enough demand to offset, the credits will roll forward. Thus, the bulk of our credits were used to offset December's bill whereas the credit was only $3.09 for July.

Upon completing this project in 2016, a home energy analyst modeled the home's output, consumption, and efficiency. The analyst estimated that operating the home would use 6,092 kWh and that the panels would generate 4,056 kWh per year, offsetting 67% of the required electricity. Looking back, we can now see that the home operated slightly less efficiently than expected, using 6,419 kWh opposed to the 6,092 kWh predicted. Similarly, the solar panels under performed the model by 678 kWh. In the end, the solar offset for 2016/17 was 53% opposed to 67%. Of course, there are many variables that contribute to the overall efficiency of this home. Things like occupant behavior, outdoor temperatures, and sunshine all have an impact on how a house performs and how much renewable energy is generated.